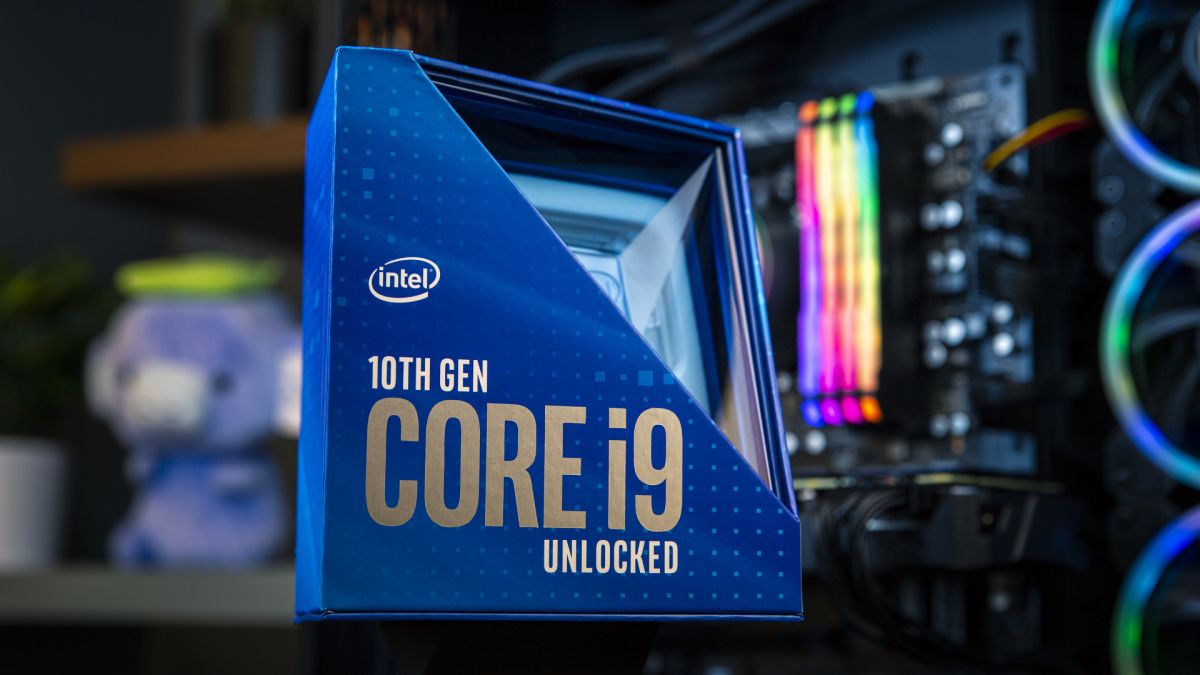 Intel has finally launched its next-gen Comet Lake processors, with a new 10th-gen flagship CPU for enthusiasts and gamers to drool over. In this article, we’re going to compare how the freshly announced Core i9-10900K stacks up against its predecessor the Core i9-9900K (which was launched back in October 2018).

Aside from the obvious two extra cores which are added into the mix, which you’ve probably already heard about, how does the 10900K push forward elsewhere with its specs? We’ll discuss this, and also look at pricing, and of course the all-important issue of performance levels compared to the outgoing 9900K.

Intel has only just announced the Core i9-10900K, and we’ve not yet had time to benchmark it ourselves. So here we will be comparing the specs, features, price, and performance based on the details Intel has provided us.

When we’ve actually tested the Core i9-10900K and put the flagship chip through its paces with our own benchmarks, we will naturally update this article with our findings.

How much is Intel charging for its sparkly new flagship? The listed RCP pricing for the Intel Core i9-10900K – in other words, the amount charged to manufacturers buying a thousand units of tray CPUs – is $488 (around £390, AU$750), which is exactly the same as the RCP price was for the 9900K at launch.

Now, bear in mind that this isn’t the retail price that consumers will pay. At the time of writing, we still don’t know that – and we still haven’t learned when these CPUs will actually be on shelves – but when they are available to buy for punters, the price will obviously be a bit higher than what manufacturers and resellers fork out.

Currently, the Core i9-9900K can be had for around $525 (around £420, AU$810) in the US, and we’ll update this article with pre-order prices for the 10900K when they become available. The price of the 9900K will almost certainly drop after the new Comet Lake flagship becomes available for obvious reasons.

At any rate, the headline news with Intel’s volume-purchasing asking price is that it’s exactly the same, so those looking for a hint of a price cut – given pressures from AMD’s Ryzen 3000 CPUs – aren’t getting one going by the RCP.

On the other hand, price-cutting was never a likely scenario, and the fact that the price hasn’t been hiked at all is good news. Certainly if you recall that when the 9900K was first introduced, the processor was pitched at around 45% more expensive than the outgoing 8700K flagship (although that was a Core i7 part, of course).

However, another cost consideration with the Core i9-10900K is that you’re going to have to pay the ‘socket tax’. In other words, because this uses a (slightly) different socket, you can’t just plonk a 10900K into an existing Intel motherboard – you need to buy a new one with the LGA 1200 socket (with various Z490 models already having been revealed by manufacturers).

For those upgrading their current PC, then, the cost of a new motherboard is an additional expense (and hassle in terms of installing it, and reconnecting everything). And if you’re specifically looking at upgrading from the 9900K to the 10900K, the cost involved then looks like a very steep jump given the performance gains.

Particularly if you’re after a high-end motherboard, as will probably be the case when forking out for a flagship CPU – because top-of-the-range Comet Lake models are seemingly getting a chunk more expensive than Coffee Lake, as a previous rumor hinted.

The price of the freshly revealed Asus ROG Maximus XII Hero Z490 motherboard, compared to the Maximus XI (Z390) version, has jumped by a hundred bucks or so (although the same isn’t true at the lower-end for Asus Z490 boards, with much more modest price increases – but they have still gone up a bit).

As already mentioned, when comparing specs, the first big difference between the new Core i9-10900K and the Core i9-9900K is that the former has 10-cores (and 20-threads) compared to the latter which ran with 8-cores (16-threads).

The outgoing 9900K has a base clock of 3.6GHz with Turbo to 5GHz on a single-core, and all-core boost to 4.7GHz – so the 10900K ups the ante by 100MHz on all those specs. It’s a minimal increase, but that’s to be expected with Intel continually hammering away at its 14nm process to get more speed gains at increasingly difficult pains, no doubt.

However, the Core i9-10900K has been graced with Intel’s Thermal Velocity Boost (TVB) technology, which means it’s actually capable of reaching 5.3GHz on a single-core, or 4.9GHz on all-cores, briefly.

Here’s the rub, though: TVB will only kick in – and be maintained – while CPU temperatures stay low enough, so basically that means it will be a short-term boost ideal for bursty workloads (and its performance will be heavily dependent on the quality of your cooling solution).

Further note that the 10900K also benefits from Intel’s Turbo Boost Max Technology 3.0, allowing for that 5.1GHz Turbo (on Boost 2.0) to be pushed that little bit further up to 5.2GHz in certain workloads or scenarios. Boost 3.0 identifies the fastest CPU cores, and uses them for better performance in single or dual-core workloads – with no voltage increase applied to those cores.

So, looking at the overall picture, on the face of it we’ve gained two cores with the 10900K, but clocks don’t look to be much of an advance on the 9900K. Granted, 5.3GHz is undoubtedly an extremely impressive headline out-of-the-box top speed for a processor, but we must bear in mind that the TVB tech which powers this boost over and above normal levels is highly situational, and temporary, meaning that in real-world terms, you may not see 5.3GHz very often, or for very long.

But the fact remains that the 10900K will still hit it, at times, right off the bat after installing it in your PC, and Turbo Boost Max 3.0 is also in the mix for lightly-threaded workloads as well.

Away from cores and clocks, other notable spec points are that the Core i9-10900K has more cache at 20MB compared to 16MB in the 9900K. The Comet Lake flagship has a TDP of 125W compared to 95W for its predecessor, so in other words, it consumes a good chunk more power. It also supports dual-channel DDR4-2933 RAM, a step forward from Coffee Lake’s DDR4-2666. Not that it will be of much concern, but the new processor’s integrated graphics stay the same as with the 9900K (Intel UHD Graphics 630).

Another point to bear in mind is that Intel’s 10th-gen chips have introduced enhanced overclocking features, including for example per-core hyper-threading disabling, which may help those who like to really tinker and tweak to get the most out of their CPU in certain situations.

And finally, as already mentioned, it’s also worth noting that the Comet Lake range uses a new socket, LGA 1200, and so is not compatible with existing LGA 1151 motherboards.

We’ve seen how the specs stack up, but the real meat of this battle between Comet Lake and Coffee Lake flagships is how well they actually perform – and we’ve already got an indication of that from early benchmarking.

Intel has provided its own benchmarks for what it is billing as the ‘world’s fastest gaming processor’ which show the gaming chops of the Core i9-10900K (while observing that 60% of games are still optimized for single-core, implying that the high clock speeds that this chip is capable of are very important to gamers).

Intel compared the Core i9-10900K to the 9900K in internal tests across a number of games, either simply measuring frames per second, or using an in-game benchmark tool if it was available.

The systems used were the same (with an RTX 2080 Ti GPU) except obviously with different motherboards, and the company did use 2933MHz RAM as supported by Comet Lake, and 2666MHz memory was used with the 9900K (32GB of RAM in both cases). The CPUs were water-cooled (the exact cooling solution wasn’t specified) and tests were run at Full HD resolution on the latest version of Windows 10 (November 2019 Update).

Monster Hunter World: Iceborne benefited from a 13% frames per second (FPS) gain, and PUBG witnessed up to a 10% bump in FPS. So those represent some very solid gains, and Intel also conducted a 4K video editing comparison (using Adobe Premiere CC) where it found the 10900K to be up to 18% faster than the 9900K.

Bannerlord is a particularly eye-opening result, and from what we’ve heard, this can be a pretty CPU-intensive game, so presumably this is showing the benefit of those extra two cores, with the full 10-cores being pushed hard by some particularly taxing scenarios that crop up in Bannerlord. Remember, this is an ‘up to’ figure, not an average FPS, and looking at the other results, it appears to be something of an outlier. (Intel tested more games than those mentioned, but didn’t provide figures for most in its press deck, and presumably would have done if they were as impressive as Bannerlord.)

As ever, a company’s own internal testing needs to be regarded with some caution, in terms of how things might be put together or cherry-picked. We’re looking forward to getting hold of the Intel Core i9-10900K and putting the flagship through its paces ourselves to see how our benchmarking compares with Intel’s. As we mentioned at the outset of this article, when we have our own results, we’ll update this article with our full findings.

If you already own the Core i9-9900K, is it really worth forking out for the 10900K, then? The simple answer to that would be no, not really.

The 10900K’s clock speed bumps are relatively minor, plus the attention-grabbing headline 5.3GHz speed is potentially of dubious value in terms of real-world usage. And while there are performance gains, they are generally reasonably modest over and above the 9900K, even going by Intel’s own benchmarks (aside from Mount & Blade 2: Bannerlord, which can pretty much be regarded as an outlier, as we already discussed).

The expense of forking out for the 10900K, plus a new Z490 motherboard – which sadly seemingly aren’t holding in price with the new generation – doesn’t make much sense as an upgrading choice.

However, it’s a rather different story for those coming from older generation processors, with the new Comet Lake flagship CPU holding in price, and delivering 10-cores with promising enough early benchmarks, and some interesting features on the overclocking front which may well prove tempting for enthusiasts.

For these folks, the Core i9-10900K could be a sterling choice, but we’re still reserving full judgement until after we conduct our own evaluation of the processor in terms of benchmarking, power consumption and cooling requirements (particularly bearing in mind that the rumor mill reckoned that power issues were a sticking point with the 10900K specifically). And naturally, we also need to compare this CPU to AMD’s Ryzen chips, like the competitively priced Ryzen 9 3900X.